Open all year free of charge.
The kasuga-dourou stone lanterns along the Main Shrine front path are lit everyday from sunset to closing.
*Since the shrine has many stone stairs, the shrine cannot be visited by people with wheelchairs and strollers. 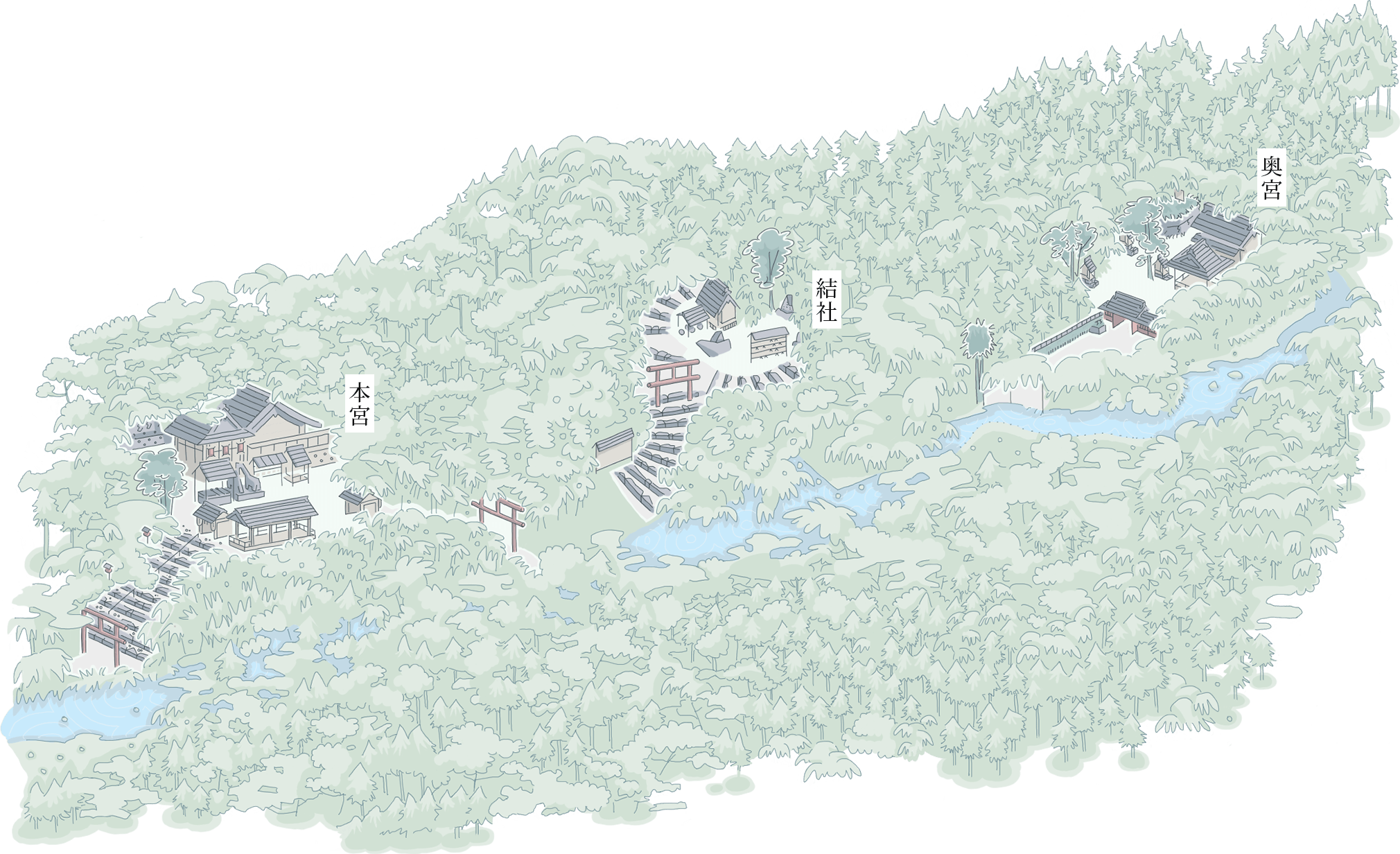 Because the rear shrine where the shrine was founded was swept away in flooding, the main shrine was moved to its current location in 1055. Since then, the shrine had by 1633 been reconstructed over 36 times and was overhauled using national funds in 1922. The current main shrine was in the reconstruction conducted during the Heisei period (1989-2019) newly rebuilt from the ground up.  The sacred water that springs forth from the stone wall in front of the shrine is Mt. Kibune spring water and is famous for its “hydromancy” where writing will appear on fortune slips when they float in the sacred fountain.

The middle shrine of Kifune Shrine and famous for matchmaking. Enshrined in the shrine is Iwanaga-hime-no-mikoto. The legend says that when Ninigi-no-mikoto, great-grandfather to Emperor Jinmu, requested to take Konohanasakuya-hime as his wife, her father instead offered the older sister, Iwanaga-hime, but Ninigi-no-mikoto only had eyes for Konohanasakuya-hime. Iwanaga-hime, greatly ashamed, proclaimed “I shall remain here and bestow good relationships upon the people,” and was subsequently enshrined at the shrine. In the Heian-period, worried about her husband’s change of heart, the lady poet Izumi Shikibu visited the shrine. With her wish being fulfilled after offering her prayer through song, the shrine was from there on known as the “Shrine of Love.”

The founding place of Kifune Shrine, it is a sacred place surrounded by forest. According to the enshrining legend, the holy boat that Tamayori-hime rode in is said to have been surrounded by stones to avoid attention. The stones, covered in moss, are even now enshrined at the inner shrine of the rear shrine. Directly below the inner shrine is a large hole called the “ryuuketsu,” dragon’s den, upon which the shrine was built. Since the ryuuketsu is a sacred place that should not be seen by people it is forbidden to be viewed by anyone and is counted amongst Japan’s Three Great Dragon Dens. 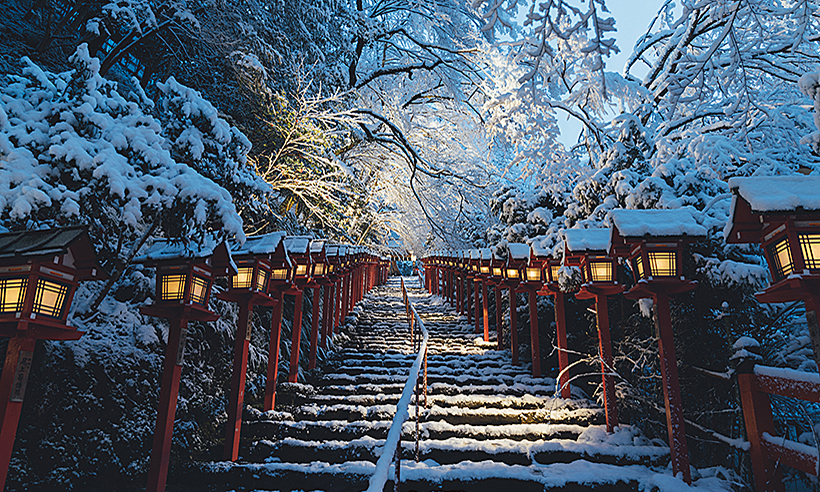 The Nature of Kifune Shrine

Surrounded by water and forest, Kibune showcases a myriad of expressions characteristic of each season. Experience a verdant and resplendent nature while exploring the shrine precincts.
Spring
Summer
Autumn
Winter 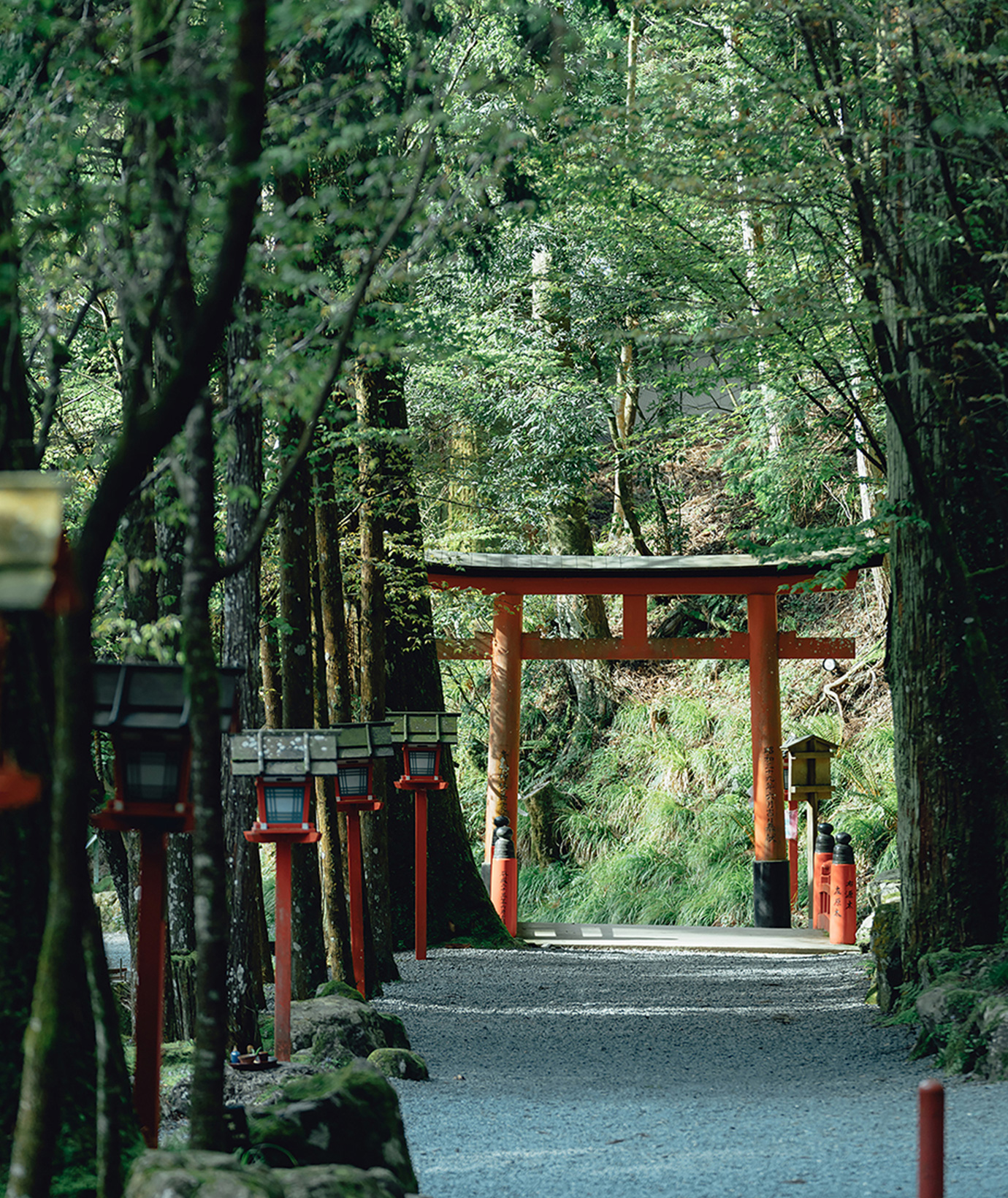 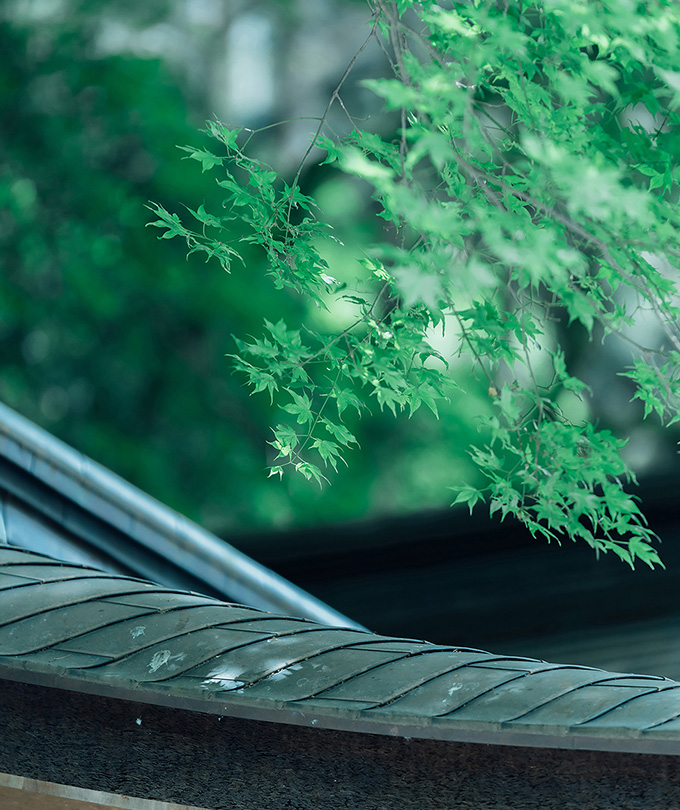 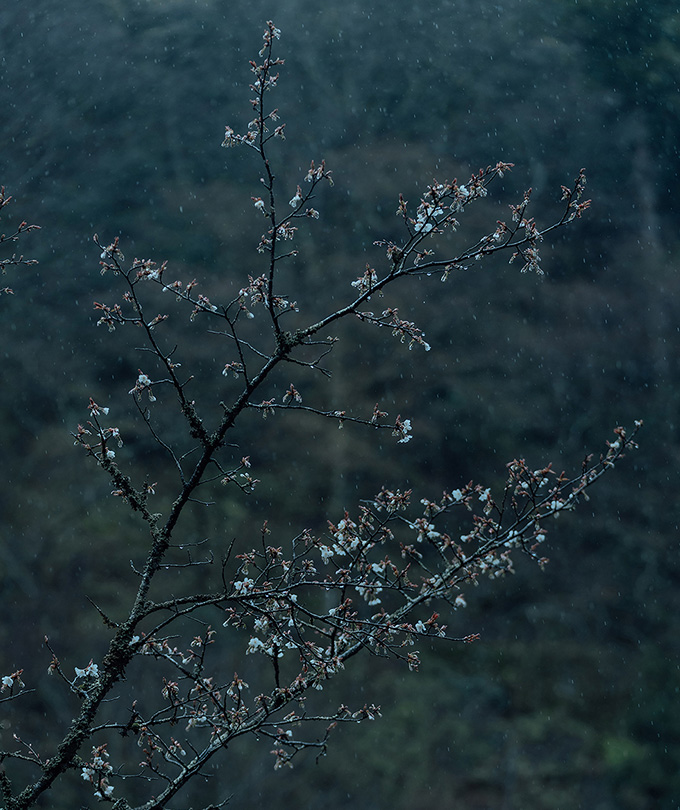 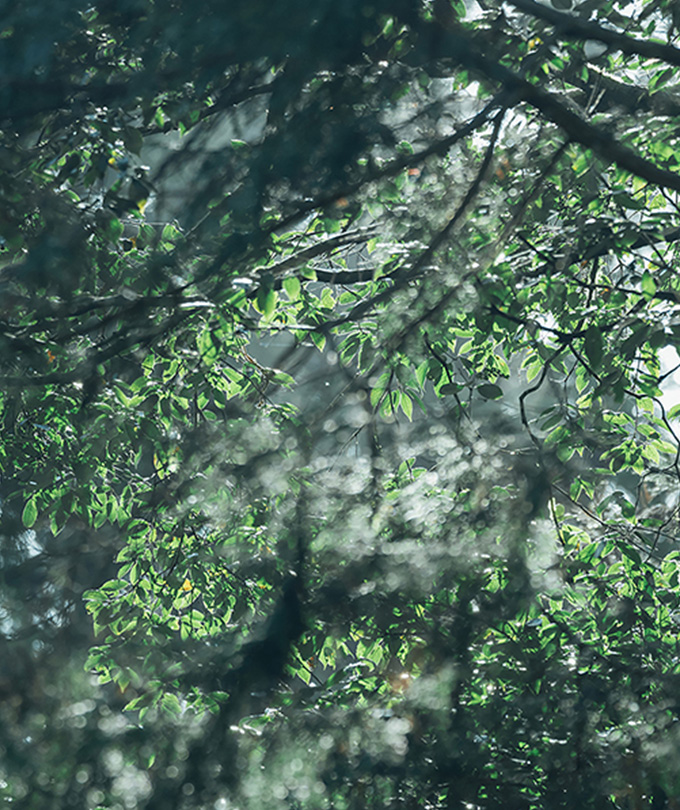 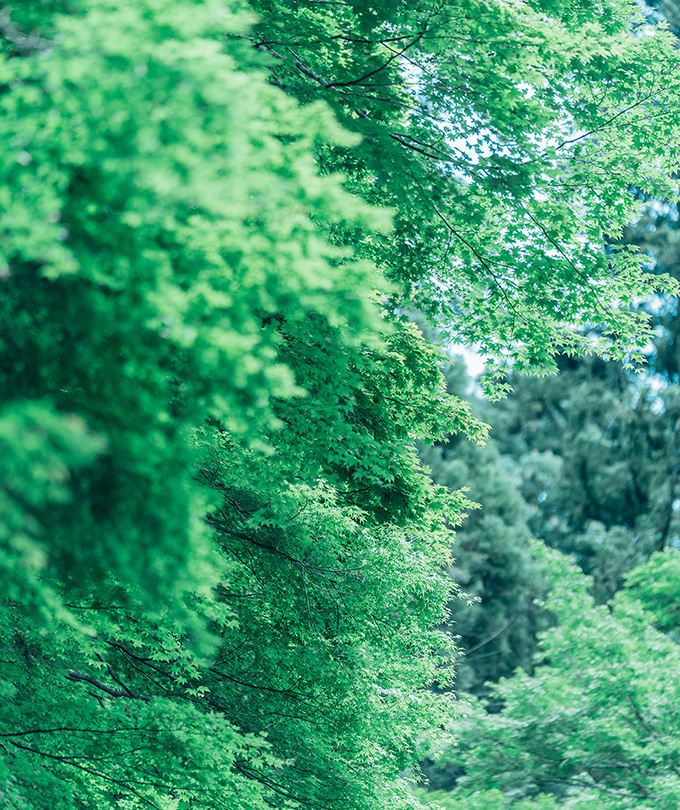 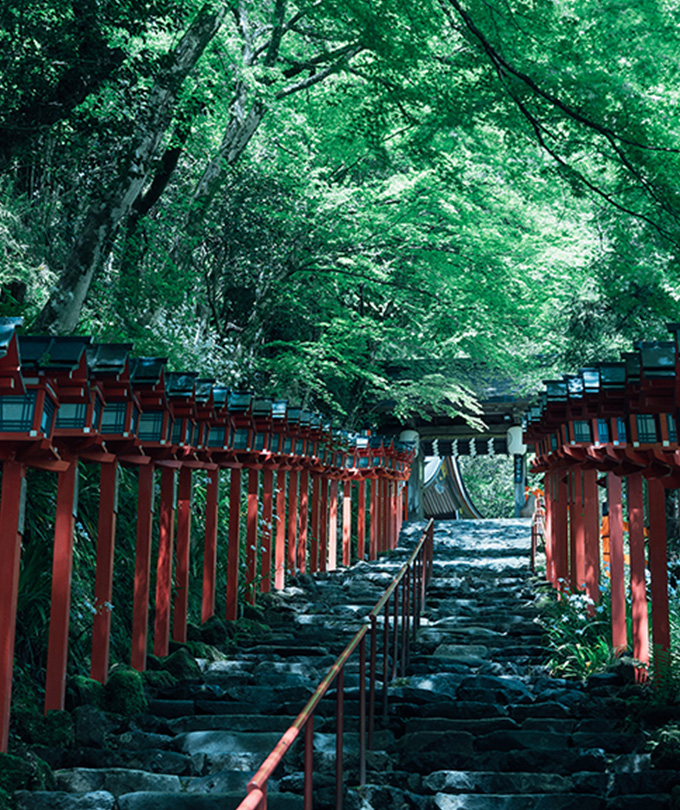 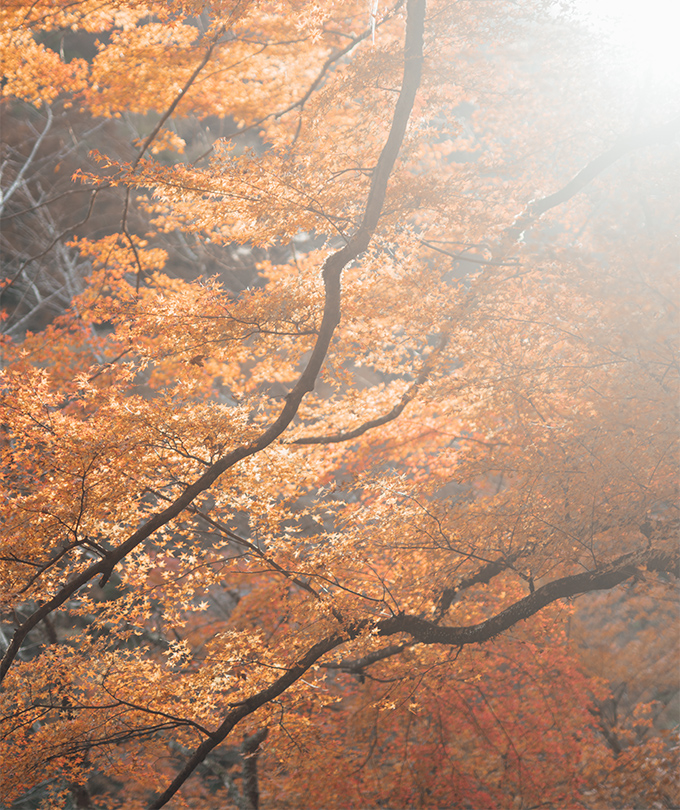 Bodily purification Temizu
1
Holding the ladle in your right hand, scoop up water and wash your left hand. Next, switch the ladle to your left hand and wash your right hand.
Bodily purification Temizu
2
Shift back to your right hand, pour some water into your left hand, put it to your mouth and rinse. (Do not touch the ladle directly with your mouth or drink the water)
Bodily purification Temizu
3
Wash your left hand once more, and lastly hold the ladle upright to wash the handle.
Worshipping
1
Stand before the altar and correct your posture. With a straight back, bend at the waist to 90 degrees and bow deeply two times.
Worshipping
2
Put your hands together at chest height, separate them to shoulder width and clap two times. When clapping, make sure to let the fingertips of your right hand be slightly lower than the left.
Worshipping
3
After clapping, put your hands together and inwardly convey your greetings and thanks to the kami. If you have a wish or prayer you can offer it now.
Worshipping
4
Lastly, bow deeply to 90 degrees once more.
Praying Etiquette
You can generally wear whatever you want when visiting the shrine. However, praying is a solemn ritual where you enter the hall of worship to give thanks to the kami, to wish, and to swear to personally face your petition. As such, refrain from visiting in light clothing such as T-shirts, jeans, and shorts. If possible, men should wear a suit with necktie (for traditional Japanese clothing haori and hakama should be worn), with women wearing equivalent clothing.
Top